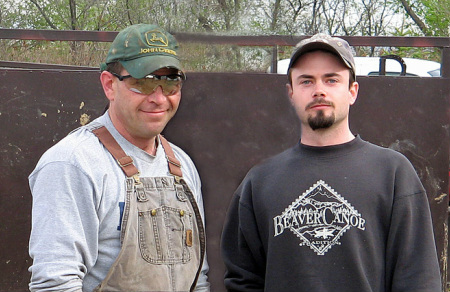 Hello, my name is Dominique Liboiron and I had the honour of being Michel Hamon's nephew.

Unfortunately, my uncle succumbed to a massive heart attack when he was only 42.

To honour his life and to raise awareness about heart disease, I canoed with my uncle's ashes from Saskatchewan, Canada to New Orleans.

When this picture of my uncle and I was taken, I had no idea that his life would be cut short. I could say the same thing for the picture of him that's at the top. As you can see by the look in his eyes, Michel was kind, sincere and thoughtful. Anyone who ever met Uncle Mitch felt a deep loss when he passed away. He made people feel special. He wasn't just my uncle, he was everyone's uncle.

My journey began June 8, 2012 and took me from the Canadian province of Saskatchewan through 13 American states and along four major rivers including the Mighty Mississippi.

The sad truth is that my uncle made some lifestyle choices that were hard on his heart. While I'm very thankful for the time I had with him, I wish he could have lived longer. If he would have had a bit more information about cardiovascular health and had he made a few lifestyle changes, we could have enjoyed more time with him.

I would hate for anyone else to lose a loved one when it could have been prevented. That is why I want to raise awareness about heart disease.

Everyone knew him as M'Nonc Mitch. (M'Nonc is French slang for "my uncle".) Even people who weren't related to him called him M'Nonc Mitch. That shows his ability to make people feel special. He cared for them as if they were part of his family.

M'Nonc Mitch had many qualities. He was an outstanding chef and had an exceptionally charming sense of humour. Mitch was extraordinarily generous and always willing to help others, but he adamantly refused to accept help for himself. As he often said, he loved "good tunes and good people." Above all else, his friends and family held a special place in his heart.

Once my uncle discovered Cajun culture, he fell in love with the music, the food and the people. He enjoyed sharing his keen interest of Louisiana's heritage and this is one of the reasons I chose New Orleans as my destination.

Obviously, being his nephew I'm biased, but I guarantee you would have liked him and he would have made you feel special.

I invite you to browse this website and discover more about Mitch and the journey that honours his life,
Dominique