Play the video to listen to one of Mitch's radio shows! 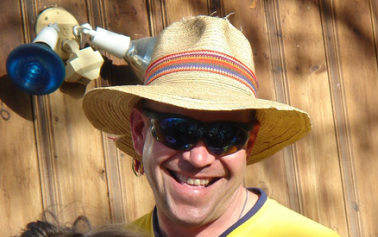 My uncle had two radio shows that focused on Cajun music, but they also included blues, bluegrass, zydeco and country. The first program was Coeur des Cajuns (Heart of the Cajuns) and it was co-hosted with "Cajun" Cam Bolen live on Regina's RCFR 89.9 FM.

When Mitch moved back to his home-town of Gravelbourg, he hosted Mardi Gras Mambo on CFRG 93.1 FM. Mardi Gras Mambo was in French, but if you don't understand what he's saying don't worry, the music is very good. He dedicated this episode to the Cajun band Beausoleil, but Mitch also included Alan Jackson, Bob Wills & the Texas Playboys, John Prine, Mark Knopfler and much more. You'll hear that the show starts with an instrumental by Beausoleil and then M'Nonc gets the good times rolling at 3:56. The show featured below is from November 22, 2005.