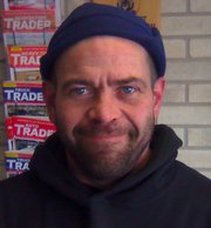 Michel was born May 17, 1968 in Gravelbourg, Saskatchewan to Emile and Therese Hamon. Mitch took his schooling in Gravelbourg and upon finishing his education at College Mathieu and Gravelbourg High School, he worked at various jobs.

In 1990, Mitch joined Canada World Youth and had the opportunity to travel to Mali, West Africa.

For several years in his mid-20s, Michel worked with francophone youth in Saskatchewan promoting the French language and culture. He was well-respected for his dedication and enthusiasm as well as the intensity he applied to his work.

At the time of his passing, he was employed at Hamon Enterprises as a mechanic and he also worked part-time at the liquor board in Gravelbourg.

Mitch was well-known for his prolific Cajun style cooking and his love of music and entertainment. His spirituality was the love he had for his friends and family and the respect and kindness he had for others. Mitch had two brothers and five sisters as well as numerous nieces and nephews. His friends and family were very important to him.

Michel’s interest in Cajun culture began many, many years ago. His discovery of their music began with Zachary Richard and bands like Little Feat who added some Cajun flair to their albums. At the time, my uncle was interested in the culture, but still hadn’t discovered its vibrancy and richness.

That would change in the early 1990s. According to his friend and radio co-host Camille Bolen, my uncle’s interest in Cajun culture intensified when Hadley Castille played his first concert in Saskatchewan. In 1992, Cam and Mitch drove to Louisiana. They saw Hadley perform live in New Orleans and also got to explore the state from cultural, musical and culinary points of view. M’Nonc was enthralled with his discoveries and returned from the trip with a deep appreciation of Cajun culture. He shared their expressions, recipes and music until the day he died.

Everyone will miss him for different reasons, but I think those who knew him will miss the way he made us feel. Mitch was always giving people presents or words of encouragement. He was generous with his time when helping a person in need. He was open with his praise and sincere with his charm. All his interactions with people had the same outcome - he made the other person feel better than they did when the interaction started. He made people feel special.

Here are some kind words that were sent to his family after the funeral:

"Carmen and I are unable to be with you at this time, but want you to know how very much we will miss Michel and all the good times we had together. We admired and respected Michel very much. We will miss his wonderful smile, sense of humour and sharing the great attributes of the Montreal Canadiens and the Saskatchewan Roughriders. He was very much part of our family. To Mme Hamon and family our thoughts and prayers are with you, may Michel have a great reunion with his dad and brother Robert."
Louis and Carmen Morin. Calgary, Alberta

"My heart goes out to Mitch's family during this very sad time. Mitch was taken much too soon. I worked with Mitch at Joe Fafard's foundry for some months and he was always a very happy character. It was pleasure to have known him. Rest in peace Mitch!!"
Joanne Nuttall. Pense, Saskatchewan

Here is a beautiful song M'Nonc's niece Sylvie Walker wrote about him and for him.